This is going to be a little lengthy but stick with it, follow the advice and your results will improve 100%. Guaranteed.

How do we get sharp images…or rather how do we ensure that the clarity and sharpness of the final image does not detract from what we want the viewer to see? For example, you might take a shot of your pet and be totally satisfied with the outcome….. and then you show it to someone and they say ‘That’s nice but it’s a bit blurry’. You may have convinced yourself that the image is really good and that the criticism is totally unjustified. And if you only take photographs for your own private viewing then please carry on…it really doesn’t matter what anyone else thinks. But for most of us image sharpness is crucial.

Don’t ‘press’ the shutter button… rather roll your finger over it: this will avoid applying downward pressure at the moment you take the shot. Take a tip from military snipers…depress the shutter button at the end of a breath.

Perhaps the one single thing you can do to guarantee removal of camera shake is to use a tripod. This pretty much eliminates all camera movement. But…make sure you use the best tripod you can afford: something that is seriously stable. The down-side of this is that very often the most stable tripods are the heaviest: something you might consider if you intend carrying one around all day. But I guarantee that image sharpness will improve considerably. Don’t be tempted to use a flimsy tripod just because it’s a bargain. Put a heavy camera and lens on one of these and you might as well not use one at all. Buy the best you can afford. You might also consider using a remote trigger to avoid touching the camera at all.

2.  A simple rule of thumb is to always try to set your shutter speed at least equal to the focal length of the lens, especially with longer lenses. For example, if you’re using a 300mm lens you should aim for a shutter speed of at least 1/300 of a second. The point is that the longer the lens the more movement you will get: a fast shutter speed will  eliminate any movement. This is particularly true if you don’t have Image Stabilization (IS). IS will help reduce lens movement at the decisive moment. Put all these things together and you’re half way to getting that ‘tack sharp’ image.

3. Aperture primarily sets the depth of field: the amount of your image you want in focus from front to back. The more open the aperture the shallower the depth of field. The smaller the aperture the greater your depth of field. Supposing you want a shallow depth of field when photographing a portrait of, say, a duck, directly facing the camera. If you don’t use single point focus it might well be that in the final image the duck’s bill is in sharp focus but its eyes are not…and vice-versa. This is because the focus points pick-up the first thing that comes into focus. Whereas, if you use single point focus and focus directly on the eye using an aperture of, for example, f5.6 you’re more likely to have the whole of the face in sharp focus. If you use a really wide aperture of, say, f2.8 the eye may be tack sharp but the duck’s bill will be too soft, which will result in a rather strange looking duck portrait. Conversely, if you use too small an aperture like f16 you’ll get most of what’s behind (and in front) of the duck in focus instead of having a pleasing blurred background/foreground. Again, if you use multiple focus points the camera may lock-on to what you don’t want.

4. Whilst out on a ‘shoot’ I met a gentleman who was inquisitive of the set-up I was using and asked how I got sharp images. After a brief chat he showed me some shots he’d taken which were very, very soft. All his settings were right but when I looked at his lens I saw the problem: it was absolutely filthy! I cleaned it for him and he was surprised how dirty it really was. The next shot he took was lovely and crisp. The point of this little story is that we should always assume that our lens might be a little dirty – so check it before you use it. If it needs cleaning then do it. It’ll be too late when you get home and start processing your pictures!

5. If you use a big lens and shoot over 100 metres on a hot day then straight away you’re fighting against all sorts of atmospheric interference: heat shimmer, dust, suspended particles in the air that reflect light etc.

Some wildlife photographers try to get really low down in order to get a good Point of View (to be in the animal’s world) but sometimes they forget that being close to the ground often results in soft images due to heat rising. Far better to wait a while until the conditions change before you lie flat on your stomach!

If you use a 600mm lens and you shoot at its full focal length on anything but a crisp clear day (any season) I guarantee your images will be soft/out of focus. A big expensive lens doesn’t equal sharpness in all conditions.

6. Focusing correctly isn’t just about locking-on to a specific part of the subject. It’s about using the correct number of focus points for the image you want: a single point or a cluster (check your camera’s manual). Sometimes, no matter how precise you focus, the image can still be soft. This is because no matter how exact you think the camera is focusing it seems that what is actually in focus is either very slightly in front or very slightly behind the point you ‘locked on’. This is known as ‘front/back focusing’ and it’s often the lens-camera-communication that’s ‘out’. This can be easily remedied: check your camera’s manual for Autofocus Micro Adjustment – it’s not too difficult to fix. It’s simply fine tuning how your AF (auto focus) lenses communicate with your camera in order to produce the most accurate focus possible. For most photographers this micro adjustment is rarely a problem but…if in doubt check it out.

Sometimes you might need to switch off auto-focus and go manual (adjusting focus manually rather than letting the camera do it for you). This is often used in conjunction with Live View (see 10 below) especially by landscape and macro photographers.

To sum up then: no matter how good your gear, no matter how great the subject, if your final image is out of focus/soft then it’s often not bad luck…it’s bad technique.

7. Watch your ISO! Lets get one thing clear: high ISO does not equal noise. Mmm! Yes, really. When you raise the ISO you are effectively increasing the sensitivity of the capture medium (sensor/film). This in itself does not equal more noise.

It’s a common misunderstanding that increasing the ISO increases noise. It does nothing of the sort. The reason high ISO produces noisy images is because for a higher ISO, you have to reduce the amount of light (signal) hitting the sensor, ultimately increasing noise ratio before ISO amplification/increase in sensitivity takes place. ISO does not by itself increase noise, only if you combine increasing ISO with decreasing shutter time / closing aperture. Remember that ISO is just one part of the Exposure Triangle. Everything is a trade-off. If you can keep your ISO as low as possible for the shot you want then by definition you reduce the amount of ‘noise’. However, I’ve taken shots at very high ISO with no discernible noise. It’s about how you balance the exposure triangle. 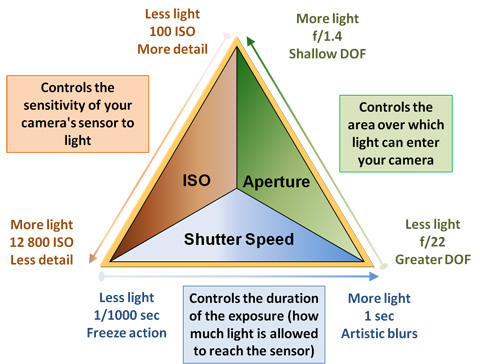 You can see from the image above  that the lower the ISO the more detail and the higher the ISO the less detail. Note the word ‘detail’…not ‘noise’ although that which causes less detail is known as ‘noise’. Try to think of noise as detail and that what causes less detail is incorrect balance of the triangle. Of course, the simple answer is use the lowest ISO you can and when you change your ISO remember to change the other sides of the triangle.

Choosing the right ISO can mean the difference between a sharp, crisp, well focused image and a soft image lacking detail. Certainly the pro camera bodies have better sensors and tend to handle ‘noise’ better than others. BUT if you get the triangle balance right noise should never be a problem.

8. Every lens has a ‘sweet spot’ where it produces the sharpest images. Generally, it’s about finding the right f-stop. This is usually about a couple of stops above ‘wide open’. For example, if I’m using a f3.5 lens the sweet spot would be f7 and so on. If you are unsure just Google the ‘sweet spot’ for your particular lens. If you’ve not tried this then give it a go. It really will make a difference.

9. Post production software gives you the opportunity to add ‘sharpening’ to your image. However, if your shot is really out of focus it’s foolish to think that the software will put it back into focus – it won’t. That’s because you can’t make something in focus if it’s already out of focus in the RAW data. The only thing the software will do is increase contrast to give the appearance of sharpness. Try it: take a deliberately out of focus shot and try to bring it back to sharpness at post production. It just won’t happen.

There are however a couple of little tricks you can use: (a) Converting an image to black and white will make it appear sharper to the human eye and (b) Using the masking tool can give the impression that the photograph is sharper. But be careful not to overuse it otherwise you’ll end up with a photo that is so far removed from reality it defies belief.

With careful use of post production software you can make  improvements to images that are just very, very slightly out of focus. But don’t overdo it!

10. Live View. Put your camera into Live View, look at the image on the LCD screen and manually adjust focus to get perfectly sharp and crisp images. Best done with the camera fixed e.g. to a tripod. Few photographers use Live View in spite of the fact that it’s something the camera gods have given us. My view is simple: if it gets you what you want, use it. If you haven’t already done so, try it.

Put 1-10 together and you’ll end up with tack sharp images. Try each in turn and then put it all together. You won’t be disappointed.