Spot metering is exactly what it says it is: your camera reads, or rather meters, the light reflected back from a very small area of your subject (If you are unsure about this idea then refer back to the page ‘Same Light…Same Exposure’) The easiest way to understand this is to set your camera’s meter pattern to ‘spot metering’ and also select the ‘centre focus point’.  Whatever you now focus on (using the centre focus point) you will also be metering off.* It goes without saying that if your subject is a long way away then it’s almost impossible to spot meter because the spot meter pattern will be much larger than a distant subject. For example, if you spot meter off a stationary animal 5 metres away the metering area will be quite small. However, if you try to spot meter off the same animal 200 metres away your camera will naturally meter a much larger area. This is because the meter-pattern size in the camera doesn’t change: the further away you are from your subject the bigger the area coverage. To quickly illustrate this important point I relate the following: Whilst delivering a Photo Workshop for the RSPB, and explaining the benefits of spot metering, one of the participants commented, ‘Spot metering is fine if your subject is close but if it’s a long way off then there’s a problem’. This was a good comment and, as I explained, it’s certainly true… BUT…there is a way round this. It’s to do with something called ‘substitute metering’. More of that elsewhere. For the moment we need to understand a few basic principles of metering and exposure.

Mid-tone and the Histogram

Remember that your camera ‘sees’ the world in approx 255 shades of grey ranging from pure black to pure white. So lets take a look at the histogram after we’ve taken a simple shot: 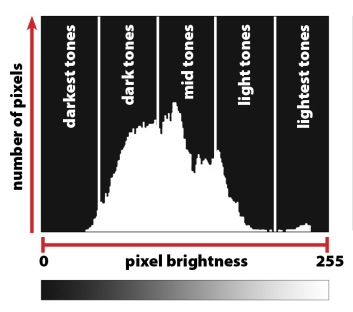 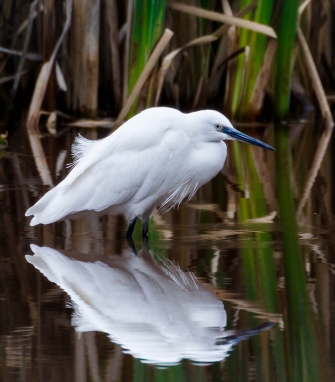 Now here’s the thing…wherever we spot meter on the bird the camera will make that area a mid tone. So if we spot meter just below the bird’s shoulder the camera will make that particular white area grey and as a result that area will ‘sit’ in the mid tone area of the histogram. The upshot of this is our image of the bird will be almost totally grey when it should be white! So how do we solve the problem and make the whites white, the dark areas dark and the blacks black?

The solution is really simple.

If we know that the area where we have metered is, in reality, ‘white with detail’, and we also know that the camera will instead make that same area a mid tone, then all we have to do is place the ‘white with detail’ area on the correct part of the histogram by simply increasing the amount of light hitting the camera’s sensor. In other words, increase the number of stops. Because a mid tone is in the centre of our histogram and our exposure scale shows it at ‘0’ then all we need to do is increase by +2 stops:

Which equates to ‘white with detail’ on our histogram. If we do this (spot meter off the ‘white with detail’ area of the bird) and then place that area correctly on the histogram by increasing the appropriate number of ‘stops’ then we end up with a perfectly exposed bird. And here’s the bonus: if we correctly place one metered area of our image on the histogram then every other part of the image will also fall into place.

This might sound a little complicated at first but I guarantee that once you get to grips with it (and it really is quite simple) you’ll spend more time composing your image rather than spinning the dials trying to get your exposure right. Getting the image composed the way we want it is, after all, what we should all be concentrating on. So try it. You’ll never look back.

*Not all DSLR’s meter off all focus points but most will meter off the centre focus point. Check your manual if unsure.